OCZ Technology manufactures a model for any price or performance range. We already took a look at their budget/mainstream focused Agility; today we have a chance to put their new Vertex 2 to the test.

We have in our lab's the 60GB OCZ Vertex 2 SATA II 2.5" Solid State Drive (SSD). The drive promises a performance in 4k file writes up to 50,000 IOPS and it is rated to last an extra 500,000 hours beyond the 1.5 million hour MTBF of the original Vertex. Building on the features of its predecessor, the Vertex 2 incorporates the Sandforce 1222 controller design and features transfer rates up to 285MB/s read and 275MB/s write.

Built with SATA 3Gb/s, the Vertex 2 Series easily integrates into today’s mobile and desktop platforms and features TRIM support to optimize performance over the drive’s lifespan as a Windows 7 notebook or desktop upgrade. The drive also comes backed by a 3-year warranty. 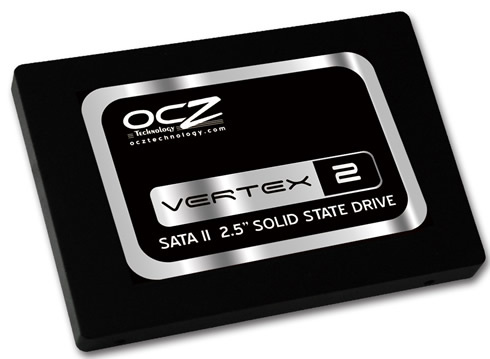 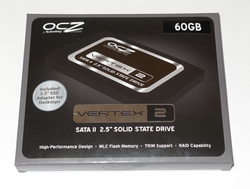 The OCZ Vertex 2 60GB SSD (OCZSSD2-2VTXE60G) retails online for about $90 and it is backed by a generous 3-year warranty.

Included with the Vertex 2 drive is the 2.5" to 3.5" converting bracket, which allows you to mount the drive into your desktop chassis, the mounting screws and an information guide:

The OCZ Vertex 2 uses a SATA II interface for the data transfer. The maximum transfer speed on SATA II interfaces is 3Gbps. Next to the SATA data interface is the SATA power interface to provide the low power needed to run the Vertex 2 drive.
(The drive uses 34nm NAND MLC flash, the current standard for this class of SSD. Thesolution is based on the Sandforce SF-1222 controller, which has been proved to offer high reading/writing speeds.)

As each generation of flash memory evolves and the silicon geometries shrink - performance, reliability, endurance, and data retention are negatively impacted. DuraWrite technology extends the life of the SSD over conventional controllers, by optimizing writes to the flash memory and delivering a write amplification below 1, without complex DRAM caching requirements.

SandForce DuraClass technology enables the SSD to maximize both the endurance and performance for the life of the drive.

The SF-1200 has also built in AES-128 bit encryption controllable by a configurable user password. This feature prevents would-be thieves from extracting data directly from the flash memory should they ever have access to the drive.

The OCZ Vertex 2 series is completely taking advantage of the capabilities of the Sandforce 1222 controller, to offer a great write and read performance. Our benchmarks showed that the drive is able to reach transfer rates up very close to the promised 285MB/s for read and 275MB/s for write, while it also delivers more than 40K IOPS for 4KB random reads and writes. The drive comes in a 2.5″ format and a SATA II interface. With such an increased performance, running two of these drives in RAID 0 would almost bottle neck an ICH10R 3.0GBps controller. In addition, with the supported TRIM function under Windows7, you will get the best performance and keep your SSD running good as new with little user interaction.

Compared to the OCZ Agility 2 60GB offering, which is available at the same price tag, the Vertex 2 60GB is offering a little bit higher small file random write performance, so generally choosing any of these drives will most probably not make significant performance difference, as least for desktop users. Still, if you have a workload that demands it, the Vertex 2 doesn't disappoint.

Spending $90 for 60GB of storage is generally to much, but that's the situation in the SSD market. So under the currently available SSD options and if your PC is not equipped with a 6GBps SATA interface, the Vertex 2 is a good buy in order to boost your PC's performance.

Enthusiasts with more patience could also wait for the first SSDs that will be equipped with the upcoming Sandforce SF-2000 controllers, who are promising to deliver 500MB/s sequential reads and writes and up to 60K IOPS for 4KB random reads and writes. OCZ is expected to release the Vertex 3 series based on SandForce’s SF-2582 controller later this year.
Positive