One of the most remarkable things about the storage industry is the fact that, although today's hard drives are much faster than those from yesteryear, they're still spinning at the same spindle speeds. 7,200 RPM has been the standard for desktop drives for a very long time now, supplanted only occasionally by enthusiast-oriented Raptors spinning their platters at 10,000 RPM. The enterprise world has managed to crank spindles up to 15,000 RPM, but that step up the rotational speed ladder happened more than nine years ago. Drives haven't spun their platters any faster since.

Rather than relying on higher spindle speeds to sustain a steady diet of incremental performance improvements, hard drive makers have instead increased the precision and speed with which drives can flow data back and forth to their spinning media. The amount of data stored on those spinning platters has grown, as well, and at an exponential rate. In just the last two years, we've seen platter capacities jump from 200GB to 250, 333, 375, and now 500GB.

As platter areal densities rise, drive heads have access to more bits over shorter physical distances, and that translates to faster performance—particularly with sequential transfers that stream large chunks of contiguous data. And so hard drives have become faster without actually running at higher speeds. 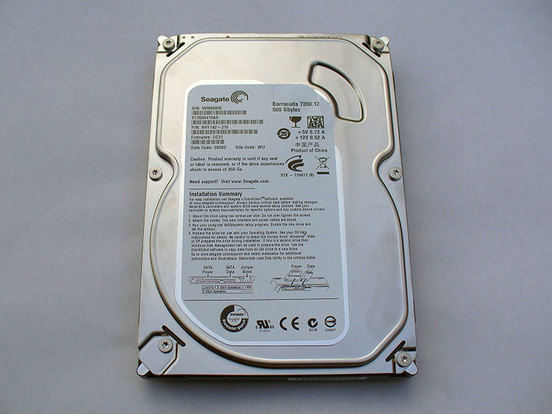 Interestingly, spindle speeds are actually slowing in some circles. Western Digital, for example, elected to launch its 500GB platters in the Caviar Green 2TB, which has a spindle speed close to 5,400 RPM. Seagate has taken a decidedly different approach, eschewing competing for the capacity crown in favor of bringing 500GB platters to market at lower capacity points, but with 7,200-RPM spindle speeds. The company's latest is the Barracuda 7200.12, which packs an even terabyte, in its highest capacity form, using only two platters.

According to Seagate, the latest Barracuda 7200.12 1TB's combination of a fast spindle speed and high areal density allow the drive to sustain data rates up to 125MB/s. That's VelociRaptor territory, folks. Granted, 125MB/s won't nearly saturate the new Barracuda's 300MB/s Serial ATA interface, but then the drive also has a 32MB DRAM cache that should be quite a bit faster than its mechanical storage.Although Seagate equips the terabyte 7200.12 with 32MB of cache, other capacities in the line aren't as well endowed. The 750GB model gets a 32MB cache, but the 500 and 250GB flavors are stuck with 16 and 8MB, respectively. At the moment, only the 500GB and 1TB models appear to be available online, with the latter considerably scarcer than the former.

There's no word yet on when higher capacities will join the 7200.12 line. You can already get a 1.5TB Barracuda, but it's an older 7200.11 with 375GB platters. Seagate has announced plans for an enterprise-class Constellation ES 2TB hard drive that will presumably use 500GB platters, but it's not slated to ship until the third quarter of this year. I'd expect that drive to have a desktop-oriented cousin in the Barracuda 7200.12 family.
It's easy to focus on the greater performance potential and higher overall storage capacity that 500GB platters bring to the table, but there are other benefits to these denser discs. Less than two years ago, it took five platters to hit the terabyte mark. These days, most 1TB drives pack three or four platters. The 7200.12 gets to a terabyte with just two discs, which means less weight for the motor to spin—and lower power consumption, as a result. According to Seagate, the 7200.12 consumes less than 5W at idle and under 10W when active.

Another benefit to the 7200.12's reduced platter count should be lower noise levels. We've found that drives with fewer platters tend to generate less noise than those with more, and we've tested noise levels at idle and under load to see now the new 'cuda stacks up.

We've also learned that Seagate has optimized the 7200.12's seek mechanism to lower acoustics. This so-called "quiet" seek mode is set at the factory and can't be adjusted by end users, and it has some significant performance implications that will become clear on the following pages. Despite optimizing seeks for lower noise levels rather than quicker access times, Seagate is still pushing its latest Barracuda as a performance-oriented drive appropriate for workstations, gaming systems, and high-end PCs.Perhaps the least obvious benefit to having fewer platters is a reduction in the odds of a catastrophic head crash crippling the drive, simply because there are fewer heads and platters to worry about. Of course, this doesn't guarantee greater reliability; given Seagate's recent firmware issues, there are certainly plenty of other ways for drives to fail.

Speaking of failures, Seagate covers the Barracuda 7200.12 with a three-year warranty. That's the industry standard for mainstream drives, but it's less than the five years of coverage Seagate used to offer for all of its internal hard drive products.