Microsoft Windows 7 will deliver DirectX 11 visual quality like never seen before, and ATI has endowed gamers with an unparalleled graphics solution in the Radeon HD 5870. While the Radeon 5800-series is a monumental feat for AMD over the unprepared competition, not everyone can fit the absolute best video card available into their budget. Armed with 1440 shader cores, the 40nm Cypress GPU HD5850 is positioned to offer an excellent value for the upper mid-range and hits the sweet-spot for DirectX 11 gamers. In this article, Benchmark Reviews compares the Sapphire ATI Radeon HD 5850 video card, model 21162-00-50R, against a cross-section of modern graphics accelerators.

While the list of DirectX 11 video games has just started to grow, with one of the first being a free Massive Multiplayer Online Role Playing Game (MMORPG) named BattleForge. Perhaps ATI has created the perfect storm for their Radeon HD 5800-series by offering a price-competitive graphics card with several free games included or available. While NVIDIA toils away with CUDA and PhysX, ATI is busy delivering the next generation of hardware for the gaming community to enjoy.

AMD has launched the Radeon 5870 as their first assault on their multi-monitor ATI Eyefinity Technology feature, using native HDMI 1.3 output paired with DisplayPort connectivity. The new Cypress GPU features the latest ATI Stream Technology, which is designed to utilize DirectCompute 5.0 and OpenCL code. These new features improve all graphical aspects of the end-user experience, such as faster multimedia transcode times and better GPGPU compute performance. AMD has already introduced a DirectCompute partnership with CyberLink, and the recent Open Physics Initiative with Pixelux promises to offer physics middleware built around OpenCL and Bullet Physics. This looks like ATI's recipe for success, since NVIDIA does not have a GPU to compete against the Radeon 5800 series or support DirectX 11. It doesn't help matters any that NVIDIA GPUs do not support OpenCL and DirectCompute 11 environments, leaving them out in the cold for the coming winter months.

From these developments ATI has distanced themselves ahead of NVIDIA by placing gamers first in their consideration, and have positioned the ATI 5xxx-series to introduce enthusiasts to a new world of DirectX 11 video games on the Microsoft Windows 7 Operating System. While most hardware enthusiasts are familiar with the back-and-forth competition between these two leading GPU chip makers, it might come as a surprise that NVIDIA actually remarked that DirectX 11 video games won't fuel video card sales, and have instead decided to revolutionize the military with CUDA technology. Perhaps we're seeing the evolution of two companies: NVIDIA transitions to the industrial sector and departs the enthusiast gaming space, and ATI successfully answers retail consumer demand. 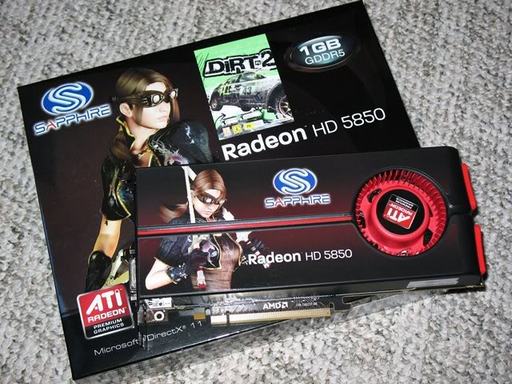 Modeled on the full DirectX 11 specifications, the ATI Radeon HD 5800 series of graphics cards delivers up to 2.72 TeraFLOPS of compute power in a single card, translating to superior performance in the latest DirectX 11 games, as well as in DirectX 9, DirectX 10, DirectX 10.1 and OpenGL titles in single card configurations or multi-card configurations using ATI CrossFireX technology. When measured in terms of game performance experienced in some of today's most popular games, the ATI Radeon HD 5800 series is up to twice as fast as the closest competing product in its class. allowing gamers to enjoy incredible new DirectX 11 games - including the forthcoming DiRT 2 from Codemasters, and Aliens vs. Predator from Rebellion, and updated version of The Lord of the Rings Online and Dungeons and Dragons Online Eberron Unlimited from Turbine - all in stunning detail with incredible frame rates.

The video card industry is hurting as bad as anyone during this economic recession, and nobody is walking around happy about PC graphics these days. They can't, really, not when many of the latest video game titles for the personal computer are released only after console versions have been made available first. Even once you get past that initial burn, you're greeted by yet another. During the 2009 business year we've seen dozens of great video games released on the PC platform, but very few of them demand any more graphical processing power than games demanded back in 2006. Video cards certainly got bigger and faster, but video games we're seriously lacking fresh development. DirectX 10 helped the industry, but every step forward received two steps back because of Windows Vista. Introduced with Windows 7, enthusiasts now have DirectX 11 detail and special effects in their video games.

The reference cooling unit on the Sapphire/ATI Radeon HD 5850 video card is held tight to the 40nm "Cypress" GPU with four screws in the corner-reinforced bracket and ten plastic screws on the back of the PCB. Considering the Cypress GPU die size is a rather large 334 mm2, and fits 2154 million transistors, the overall heat dissipation is spread over a suitable landscape. The double-height cooler does a very good job of cooling the 5850, but there is still a tremendous amount of heat that builds up on backside of the PCB. If you're an overclocker, there isn't much that can be done to help cool the unit from the reverse side of the circuit board, especially since there aren't any vRAM modules mounted at the backside of the PCB on this video card. 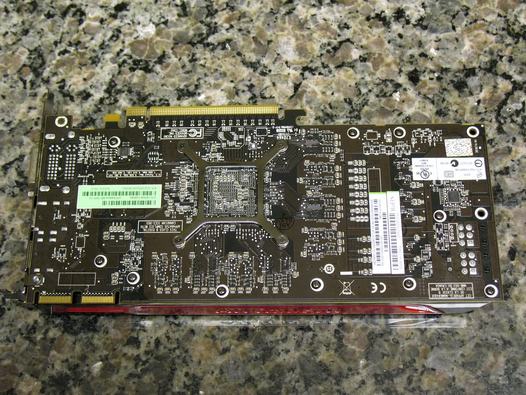 As of October 2009 Benchmark Reviews has discontinued testing on the Windows XP (DirectX 9) Operating System, although it is recognized that 52% or more of the gaming world still use this O/S. DirectX 11 is native to the Microsoft Windows 7 Operating System, and will be the centerpiece of our test platform for the foreseeable future. In many tests, DirectX 10 is utilized on the Windows 7 platform
ATI Eyefinity advanced multiple-display technology launches a new era of panoramic computing, helping to boost productivity and multitasking with innovative graphics display capabilities supporting massive desktop workspaces, creating ultra-immersive computing environments with super-high resolution gaming and entertainment, and enabling easy configuration and supporting up to six independent display outputs simultaneously.

In the past, multi-display systems catered to professionals in specific industries. Financial, gas and oil, and medical are just some industries where multi-display systems are not only desirable, but a necessity. Today, even graphic designers, CAD engineers and programmers are attaching more than one displays to their workstation. A major benefit of a multi-display system is simple and universal - it enables increased productivity. This has been demonstrated in industry studies which have shown that attaching more than one display device to a PC can significantly increase user productivity.

The early multi-display solutions were non-ideal. The bulky CRT monitors claimed too much desk space, thinner LCD monitors were very expensive, and external multi-display hardware was inconvenient and also very expensive. These issues are much less of a concern today. LCD monitors are very affordable and current generation GPUs can drive multiple display devices independently and simultaneously, without the need for external hardware. Despite the advancements in multi-display technology, AMD engineers still felt there was room for improvement, especially regarding the display interfaces. VGA carries analog signals and needs a dedicated DAC per display output, which consumes power and ASIC space. Dual-Link DVI is digital, but requires a dedicated clock source per display output and uses too many IO pins from our GPU. If we were to overcome the dual display per GPU barrier, it was clear that we needed a superior display interface.